Test day in two classes and pinhole camera darkroom day on a third. Above, in grading an excellently organized bonder. The sticky notes I’ve printed on are a huge timesaver. 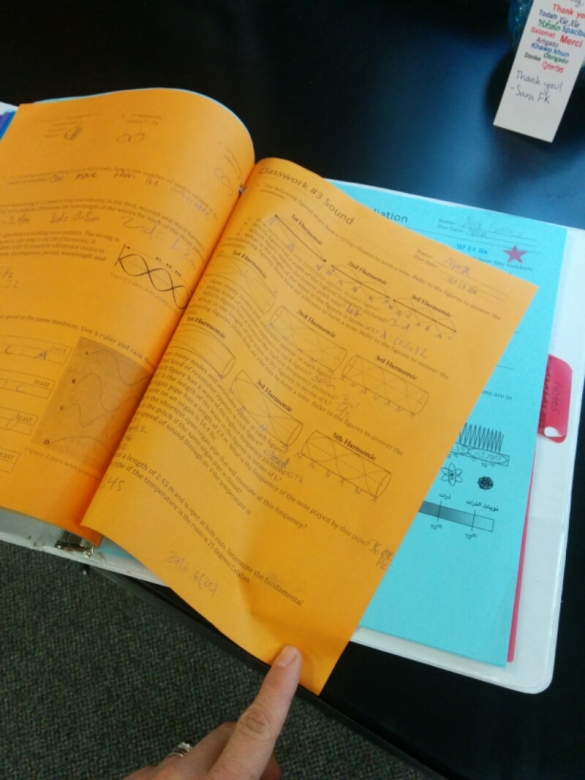 Classwork from two different units in an excellent binder. Colored copy paper is a resource I’m so glad I have.

The kids in the darkroom are struggling with making their cameras light tight. Midst couldn’t fix the problems within the period while exposing 3-4 images. Pictures of cameras and photos coming soon. 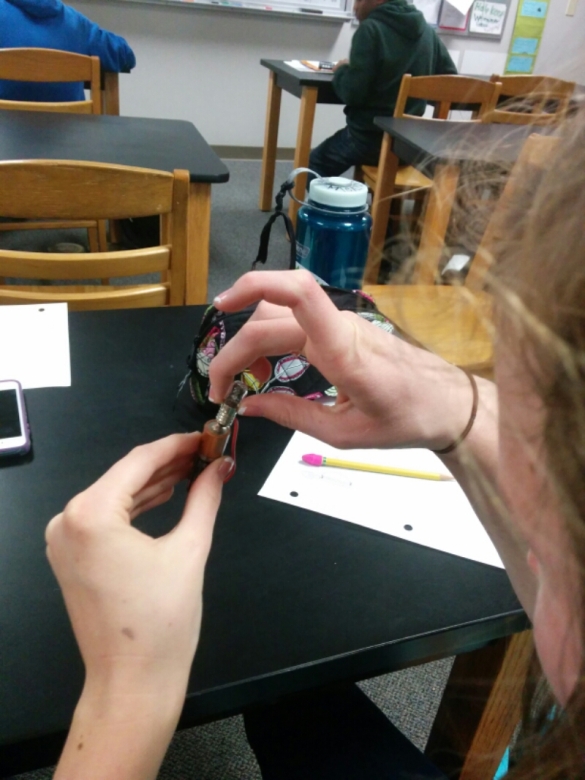 Can you light a bulb using only one wire, one battery, and one bulb? (Probably apocryphal, but MIT engineers supposedly struggle with this question.) This is easily my top unit intro activity — I did it last year on Day 67. We’re starting our electric circuits unit this week.

I asked them to sketch what doesn’t work:

After we found all the different configurations to light the bulb, the kids wondered what would happen if they used more batteries:

When you ask the kids what it takes to make the bulb light, they tell me “a circuit”. I ask “why?” They say “so the electricity flow.” I ask “what’s electricity?” They’re stumped. I ask “what do you mean by circuit?” They say “a loop of connected wires or parts.” We’re already hinting at ideas like serial (batteries), positive and negative terminals, current, voltage, and even short circuits.

The Discovery session I’m leading is themed around geocaching. Above, I placed a new cache and recorded the coordinates. (App is called c:geo)

In class, I spent some time outlining the last unit before unleashing students on self-directed study time. I’m super happy at the results because it helped students see the whole unit in context.

We built pinhole cameras today! Pictured, students had to calculate the optimal pinhole diameter, find a pin approximately that diameter, and punch a hole in a piece of aluminum. Nearly none of the students had ever used calipers before.

Also, a kid drew a robot on his classwork:

I’m a part time Discovery faculty member, which means I occasionally help lead freshmen on their experiential outdoor, expedition, team building course. Here, a group of about 10 have just succeeded in flipping a tarp over while standing on it.

Given this picture, what’s the best question I could write to accompany it? I’m favoring “What is the most likely liquid in the dish? (give a list of liquids with indices of refraction)”

My kids completed their refraction lab today and I snapped a few photos in case I want to use them on an upcoming test. I’m beginning to think I need to revisit “lab questions” on my tests. 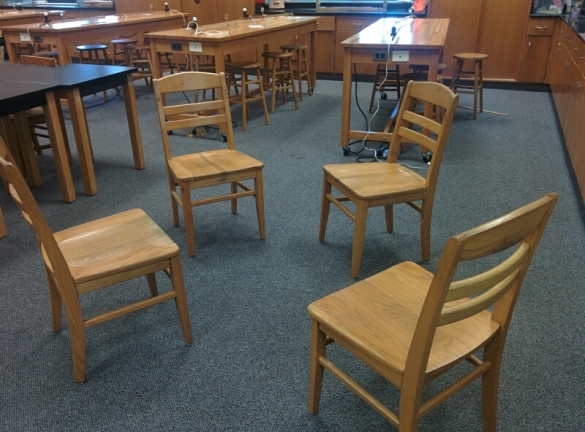 Today was set aside for advisement conferences, no school for students. I met with the parents of the eight young women I advise. Exhausting but totally worth it to see the whole-picture view of these students.

I also spent time picking the brain of my neighbor next door. My grading load is crazy right now, so I asked how he manages it. He told me three things: 1) break bigger labs into several smaller chunks, 2) get kids to self-correct their labs in pen when you go over them just before turning the labs in, and 3) only grade some parts of the lab. He said he mixes what he grades up, sometimes grades what he deems important other times going kind of random on them. I’m totally behind him on breaking labs into chunks. Done. It never occurred to me that I could have kids do quiz-style corrections on labs. Genius! He grants nearly full credit for a corrected answer to a lab question. I can do that, starting pretty much immediately. As for grading a portion, I dunno. But for now, the first two help me out a bunch.

Man, I love having colleagues who teach what I do and know what’s up.

When I ran out of plug-in light bulbs for the optics lab, I scavenged a few candles and WOW, the results were amazing (if not messy). Kids were so impressed that the real image they captured on the index card was flickering.

I’m fairly happy with how this lab works, so here it is: Lenses Lab.

A group of teachers seeking to make some changes in the middle school regarding STEAM[1] initiatives sought our feedback as the schoolwide STEAM learning group. They brought what they called low-res models and held an otherwise fairly standard feedback session where we left comments on stickies. The models were super-cool as a way to visualize what they were talking about.

I was blown away because I’m so used to folks lecturing to me about how I should stop lecturing. This small working group is indeed practicing what they preach, modeling the skills they want us to use in the classroom.

[1] STEAM stands for Science Technology Engineering Art and Math. There’s a group of us who meet weekly to plan an annual show of STEAM projects around the school. Along the way, we learn about the relevant amazing work our colleagues are doing. Above are my “old” advisees from the last two years — they’re seniors now and are advised by the college counselors. I miss each and every one of them on a pretty regular basis, so it was super-exciting when ALL of them returned today to hand out candy to my freshman advisees. (2nd from the left is my favorite costume — Morello from Orange is the New Black) 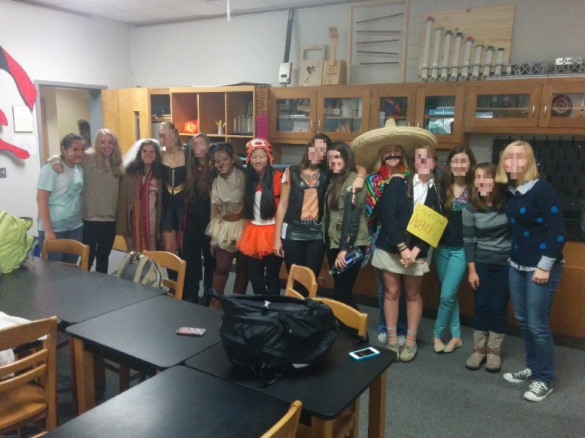 The new kids obliged me with a group photo of everyone.