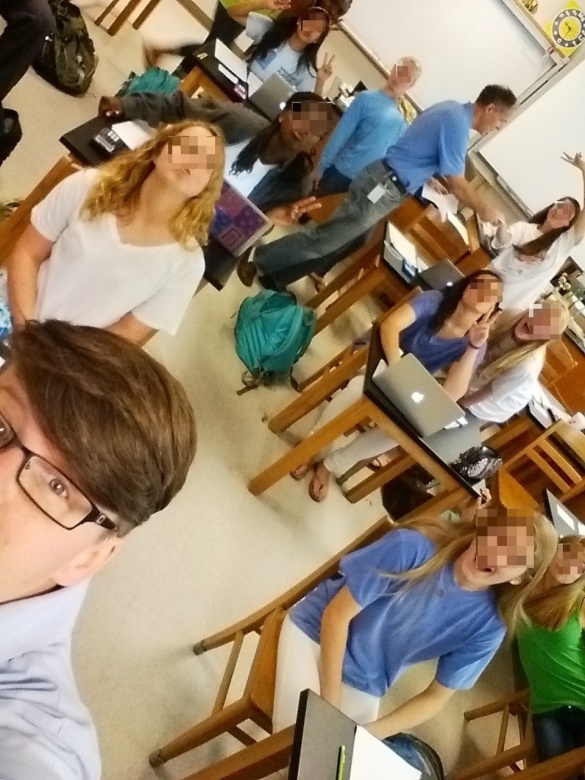 All of my students took their physics exam today. I was on duty moving from room to room to answer questions. As is my habit, the kids took their exam on Moodle AND showed their work on paper.

If there’s one thing my kids learned this year, it was how to explain why their answer was marked incorrect by Moodle, a useful skill I think. There were plenty of instances of kids transposing two numbers or fat-fingering keys on their calculators. I was merciful on them (plus — they found the error rather than making me hunt for it!) in these instances.

During the exam, one young woman asked me which direction she should assume is positive, up or down. I told her that so long as she said that on her paper she’d get full credit for a correct solution. She went ahead and assumed the down direction was positive y (+y down), where Moodle assumed the opposite. Moodle initially marked her wrong. Here’s what I found on her paper when reviewing it. (Because the work is in pencil, I can tell she did it before submitting the test and knowing her answer was considered wrong by Moodle.) 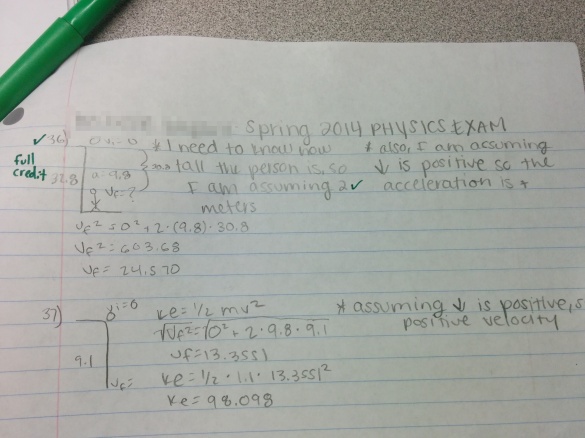 I ❤ when students make their assumptions clear when showing work.

Here’s another example of student work on the exam. 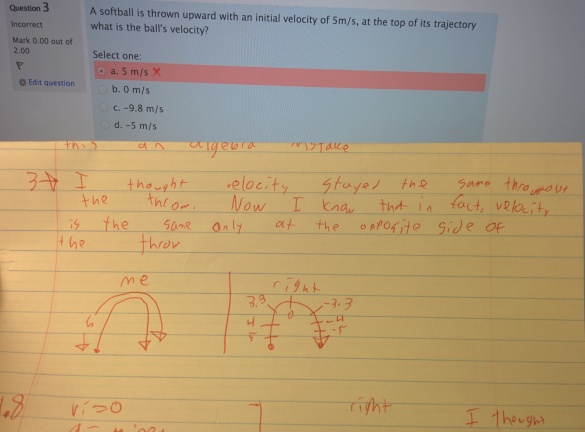 This kid got a multiple choice question wrong. He added this correction at the end of his test explaining his original thinking and his revised thinking. I granted 1/4 credit for this correction.

Today marks the end of my 180 blogging experiment. I have additional reflection for another time but want to share that the hardest part was remembering to take a picture of whatever we did in class. The best part was forcing myself to reflect on every day (pretty much) as it happened.

Today I’m proctoring the Spanish III final. This exam is quite different from yesterday’s math one. For one, it’s mostly multiple choice with an essay at the end.

But because this exam is taking place in a chemistry classroom, I’m too engrossed by what’s hanging from the ceiling to think deeply about how exam formats reinforce a teacher’s values. Everywhere I look, I see moles. 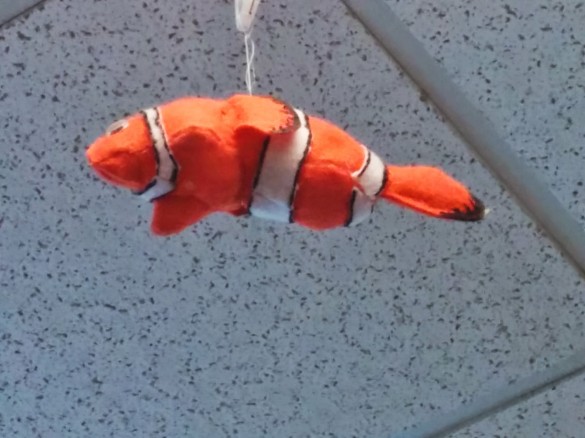 Today, I proctored a math exam — Algebra II. Proctoring mostly means I have time to do my own thing, including catching up on 180 blogging. Additionally, I read the rest of the rocket project papers (that were turned in late!) and generally killed time.

I did peek at the math exam to see both content and delivery method. The exam came in two parts — green to be done without calculator and white may optionally use a calculator. Green gets turned in permanently before grabbing your calculator. Also, the exam as a joint effort among all the Honors Algebra II teachers.

After the exam, the science teachers convened at our department chair’s home for our annual luncheon and a surprise 40th birthday cake for three of us. The year is almost done on this, my 10th year of teaching. It’s weird to think of all that’s changed in that time. I was hired with zero experience by a school willing to take a chance because I had passion. I got to teach some pretty amazing kids in the intervening time and have had a share of challenging students I’ll also never forget. 2 more wakeups.

First day of exams — my students sat for their history or Bible exam. Meanwhile, I was traveling back from a wedding in Philadelphia.

Ashli asked what’s on our walls as part of the #MTBoS30 blogging challenge, so check it out above. This panoramic shot of my classroom shows off the superheroes, xkcd comics, and a Space Shuttle launch I’ve hung.

Baccalaureate service this evening. The teachers line up and process into the auditorium, so naturally, I used it as an opportunity to take selfies. The service was lovely and the speaker, Reverend Wirth, told a great joke about retiring to our president, Bill Clarkson on the occasion of his retirement.

Also, it’s my little brother’s birthday, so shout out to him.

My setup for grading papers against a rubric.

My schedule today consisted of two classes who meet for nearly the last time before exams next week. I do a few things in this kind of time: 1) allow the kids to check their grades with me (all grades are available on Moodle at all times), 2) answer exam review questions, and 3) allow kids the space and time to work together on exam review.

I had my own work during the lulls between them asking me questions which I filled with grading final papers for our rocketry project. The screenshot above shows how I set up to grade the papers against the rubric. Inevitably, I spot stuff as I grade that I really wish kids understood about writing a paper. Below is the running list I’ve created while grading these papers that I’d like to address next year. So far the list addresses many more mechanical details than stylistic. While there are certainly style issues to tackle with the kiddos, I must restrain myself or I’ll run out of time to teach any physics.

This former student of mine is a Gates Millenium Scholar, one of 1,000 nationwide.

I found out recently that a former student of mine earned the Gates Millenium Scholarship to attend University of Georgia in the fall. The kid played JV soccer and I always found him to be not only athletically talented but also an honorable young man. Tonight, I learned he needs some help getting set up in his dorm room at UGA. In response, my former colleague and his English teacher has set up a fundraising drive to help the kid get his dorm room set up. It was awesome seeing his name again and being able to help send him off to college.

He’s the second kid from that team I coached to win the Gates Millenium Scholarship. The other one is in his first year at Oglethorpe.

My fourth of four classes launched their rockets today and I’ve just gotten the routine down. At launch time, the kids have to measure a few data points so they can later calculate the rocket’s maximum height.

Back when I showed the kids how to use the Impulse-Momentum Theorem to do the calculations (it was a little trickier because the rocket’s thrust isn’t constant nor is its mass), we admitted the physics could be off. Way off. Is that the case? Today, one class did their calculations and they came out about like this: we measured the rocket’s max altitude of approximately 65º from a distance of about 60 meters from the launch pad. That yields an altitude of about 125m.

Were we off? The calculations predicted something between 200 and 300 m. So a measurement of 125 m is way low. I remain unconvinced the kids got good measurements yesterday, though. Estes reports the our configuration, a Viking Rocket with an unspecified motor can get up to 1600 m and a YouTube reviewer says about 200 m. That latter number is between what we calculated and measured, but closer to our calculations. Note to my next year self: figure out a better way to measure the rocket’s maximum altitude. Could be more people spotting the same rocket to measure angle. Could be more careful supervision of the kids measuring. I’m not sure.

Today was launch day for 3 of my 4 classes! We built the rockets from kits, made a few calculations about launch velocity and maximum altitude they should achieve, then launched them.

The rocket project was written by my colleague Akwetee for our unit on Impulse and Momentum. We’ve discussed as a group of physics teachers at my school that we like this project because it puts fun at the front end (building a rocket) rather than delaying all the fun till the end. We agree that kids will get into projects more deeply if they perceive them as fun or interesting.

On launch day, the main objectives were to measure the max altitude of the rockets and the launch velocity. Several kids commented that they were surprised by how fast the rockets leave the launchpad.

Today was sunny, hot, and humid. I got a nice sunburn to show for my efforts but it was so nice to spend an entire school day outdoors with kids. We cheered for just about every launch and wept over the ones that got caught in trees. 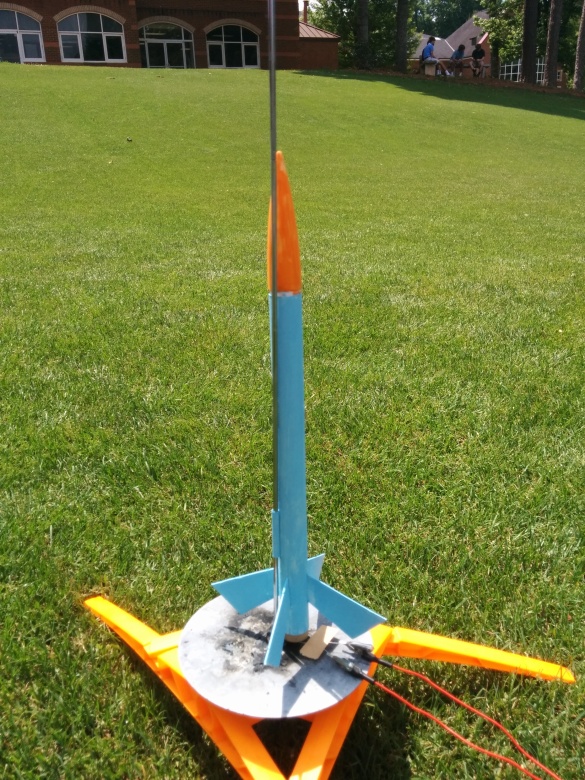 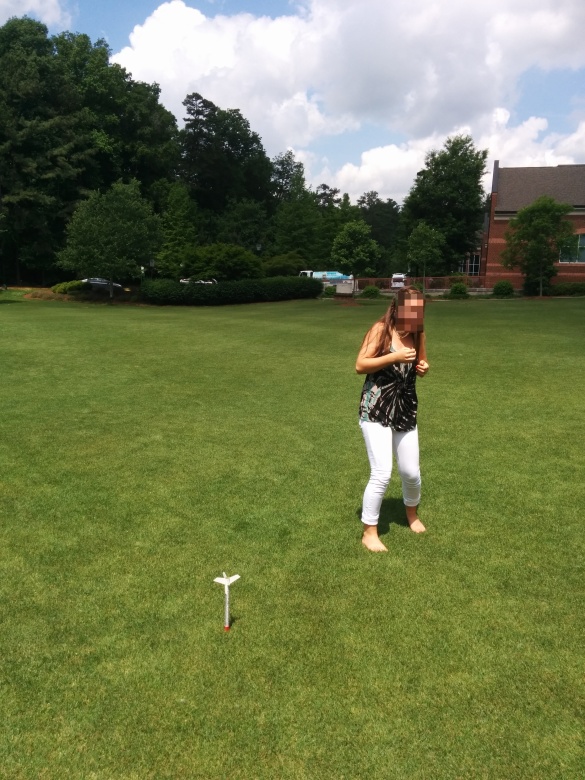 A few rockets impaled themselves when their chutes failed to deploy.

Student work I’d rather not see next year.

I’ve written before about my system for partial credit but one paper from today’s quiz has me thinking again how I can improve this system I already like. The system rests on the confidence I have that students can explain a correct solution given the answer to the problem.

Above is a kid who struggles to earn partial credit through an approved method: either correctly identifying his mistakes or by showing a (new) correct solution. Instead, he always tags his mistakes as “math” errors with no indication of what exactly the error was, which is totally unhelpful to him or me.

Oh, and for the curious, here’s the question he was attempting to solve:

My goal is to have kids do one of the following when correcting tests: