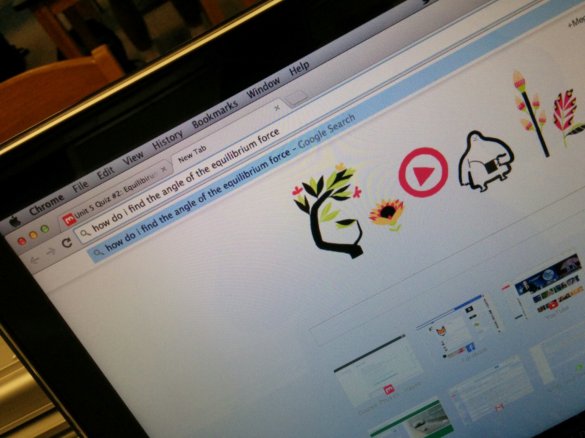 This was totally weird — I’ve been open about my quizzes being open-internet but today was the first day I really paid attention to what the kids searched for while taking the quiz. Above is a real example from class. What was the kid thinking with this query?* It’s gotten me curious as to what they’re searching and why.

I wrote in detail about my experience with kids taking an open-internet quiz on my main blog.

* my wife suspects the kid thinks they’re using Ask Jeeves, the early ’00 search engine that encouraged searches phrased as questions. I pointed out the kids were in diapers at the time Ask Jeeves was all the rage. Back to the drawing board.

An example of a basic equilibrium problem from my class.

Between questions on homework and classwork, we’ve slowed down on the friction lab so that we might dive back into equilibrium. Kids have a quiz on equilibrium Thursday or Friday this week.

So, when I teach about net force and equilibriants, I take a common-sense approach rather than teaching kids the “steps” to solve. First thing I have them do is draw a picture and identify the quadrant their result will appear in. For instance, if two forces pull on a crate, one toward 90° and the other toward 180° and I ask for the direction of the equilibriant force, kids should realize it’ll be in the 4th quadrant (therefore the answer is between 270° and 360°).

Here’s a student solution that’s typical of the kids getting these problems wrong:

While some kids understand the intuitive part of these problems others want to memorize some algorithm. I’m refusing to give it to them which is frustrating all of us to no end. I’m beginning to feel like I need to give some incentive for a good diagram to force the algorithm-memorizers into using good habits.

I almost forgot! Wednesday was also the opening of the STEAM art show on campus. Here, a Lower School reporter interviews two of my robotics kids about their entry into the show (the robot behind them).

Today, a couple of my classes needed to finish their classwork on equilibrium. In the picture above, the young man is explaining how to find the angle of an equilibrium force given two other forces. He’s only understood the problem for about 5 minutes before this group of young women ask the same question. He jumped in and offered to help. His explanation was super-awesome.

On the physics of it all: Equilibriants stymie so many of my kids. Why is this? I think it’s because they aren’t methodical in their drawings and lose sight of what they’re solving for. Also, too many kids want to memorize some formula to get their angle into standard position (Stu: “So I always add my angle to 270?” Me: “No, depends on your picture.” Them: “So I always add 180?” Me: *facepalm*) 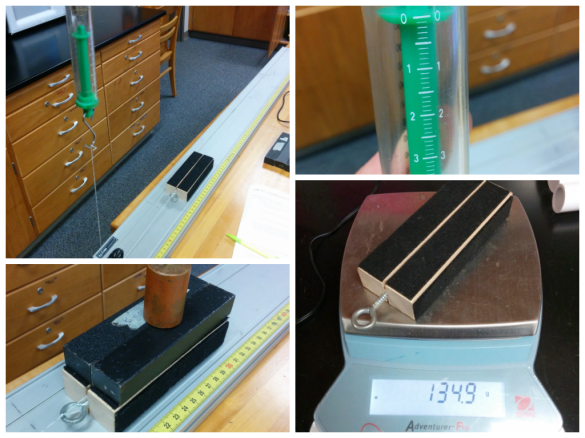 Find the coefficient of friction given the materials pictured above. It’s a classic lab in physics that I inquiry-ified with some satisfaction. I asked the kids at the start which properties will affect the friction force between two materials. They quickly ruled out irrelevant properties like color. We debated properties of the environment such as temperature and humidity. Everyone agreed that weight of the block certainly makes a difference. Some kids wanted to investigate surface area, too.

I say I inquiry-ified the lab with some satisfaction — that’s because the only property I was prepared for them to investigate was the weight of the block. In reality, the inquiry part was an illusion, which doesn’t sit well with me.

Side note: I dig the rubrics on most pages so that kids know exactly what I’m looking for. I want to refine this concept by adding line items such as “the data’s good”, “the best fit line’s appropriate”, etc. Adding those without reducing the entire lab to a checklist with no original thinking is the tricky bit.

Get the Word version of this lab.

And in the first instance this year, I forgot to blog 3 days. We were learning about equilibrium and Newton’s Second Law. My only excuse is that it’s the 3 days before spring break and my mind must’ve already been on vacation.

Oh wait! I do remember something: on Thursday, the robotics team met to finalize travel during spring break to the FIRST Robotics Competition in Dallas. Below is a snapshot I took of the captains speaking to the team about repairs we needed to make to the robot upon arrival. Time was tight, so good coordination was important. 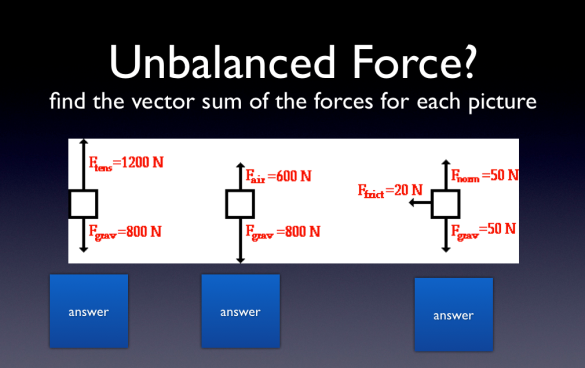 Y’know, I didn’t need to teach this at all this year — most just looked at the FBD, found the net force, then could calculate the acceleration if I gave them a mass.

My kids got a solid mathematical background in forces during their junior high physical science class. That is to say they know how to calculate forces in newtons and how to find the net force given the acceleration and mass of an object. Like nearly everyone, however, they struggle with “if there’s no net force on an object, the object moves with constant velocity”.

What was the warmup in 4th period?

Almost everyone got the net force for “pull in same direction” and “pull in opposite direction”. Nearly all needed a hint on how “at right angles” looks.

Is this what I want my comments to say?

One of the biggest differences between public  and independent school teaching is the individual attention we’re asked to give our students. To that end, my school asks us to write narrative comments for students at mid-semester. Ours were due today at 8:30am.

Is that what I want my comments to say? Basically, yes. I am happy with the concreteness of the comments — they offer specific advice on academic improvement, usually “do the homework you don’t currently do”. I’d prefer that I had more specific details on student performance from the last 9 weeks. That happens only when I remember to maintain my Evernote student-comments notebook daily.

Note to self: jot notes into the Evernote comments on a daily. Make sure I’ve noted something about every kid every 2 weeks. Details matter. 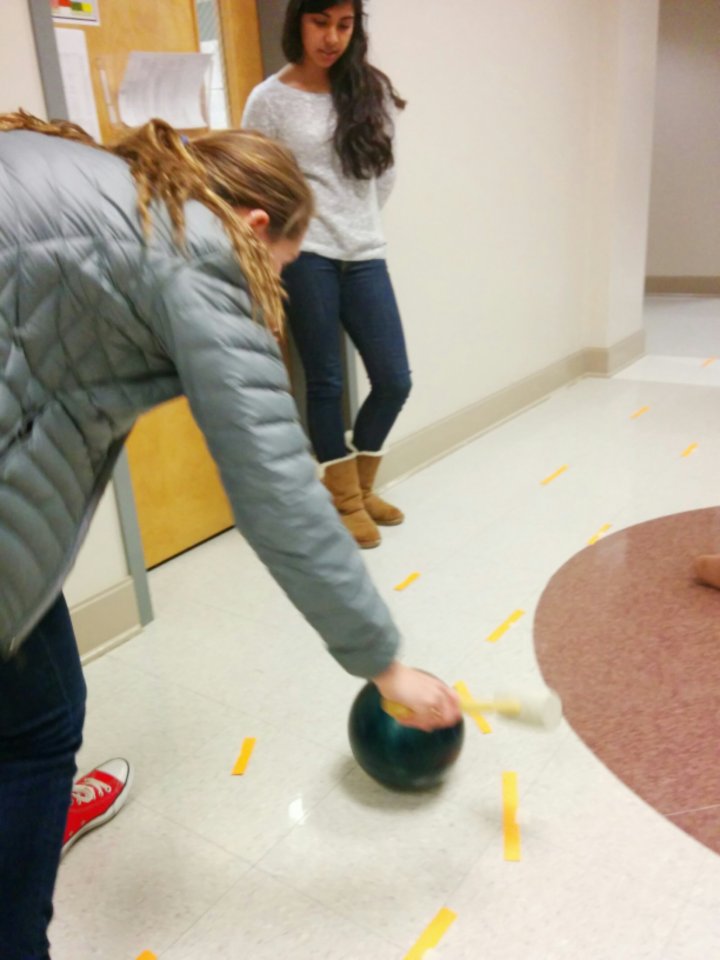 Victors got their names on this meaningless trophy I keep on hand.

The first class to land upon the Forces unit happened to be my 5th period group. Above, you see one of the kids navigating a simple obstacle course with only a rubber mallet and a bowling ball. I asked them to note three moves for discussion later:

We timed everyone and I awarded space for their names on the meaningless class trophy, pictured above.

What was the warmup with 5th period?

Before we played with the bowling balls, I showed them this question:

Today, three of my classes took the unit test on kinematics. Knowing that I zoomed through projectile motion, I minimized that topic on the test. You would have thought they’d spilled blood today, the way the kids reacted. I didn’t actually witness any crying but I’m sure tears were shed.

By way of background, my test averages usually come out 85-88%, so this wasn’t too much lower. My lowest scores are usually in the 60s, though. I usually have a handful of 100s, too. Not true this time out. I saw more people in the middle. One class scored about 5 points below the overall average, so they’re looking at a class average of 74%, which is horrible for them. I don’t have a clear picture as to what happened with that class — my fault or theirs?

In terms of mistakes, I saw kids completely disregarding the order of operations while solving for a variable, assuming constant velocity vertically, and messing up the acceleration due to gravity in vertical motion (thinking it’s positive when the object is moving up and negative when the object’s moving down).

So, was it a testing disaster? Nah. Was the test tough? Yes, but not too much more than usual. Do the kids see that? Nope. What will I change next year? More frequent quizzing on the concepts. Onward!